Tongues in two cheeks lead the long-awaited current issue. Gunnells & Ritchie treat us to a blue collar riposte to the mystery at the top of the mountain, and to the extra-mundane of daytime soap-myth. Traditional settings also come in twos this time, as Playle tackles mercy and meetings, while Chenier gives us cycles and secrets. Staffer Mary Pat Mann did double the work for this issue, not the least of which are two nonfiction pieces. We commissioned her to write a review of the 2006 MYTHIC JOURNEYS con, and she also contributes something of a definition of what we do here, with her essay: "The Door to the Imaginal Realm". Topped off by Paul Campbell's unique cover art, we're proud to scorch the screen for Summer 2006. - Asher Black, Editor-in-Chief

You've climbed the high mountain. You've searched out the great sage. You've come asking the mysteries of the world. Now, the question is simple. Do you want a beer? Teresa Tunaley illustrated this short fiction that toasts the ascent of the average.

As The Young and the Beautiful
Turn on the Light

It's a weekday morning. You've been working hard around the house. You relax for a moment on the sofa, plagued by tantalizing questions. What is Lucky hiding from Elizabeth? Is Patrick infected? Will Jeffrey return to Oakdale? But what if it wasn't Elizabeth, or Patrick, or Jeffrey? What if it was you? Teresa Tunaley illustrated this piece that points out our penchant for myth, even while we're mopping the dining room.

Have you ever had a secret? Not the kind about something that was done, but a secret about who you are? Are you familiar with the first nagging feelings that someone is finding out - that you are beginning to be visible for what you are?

Perhaps the universal truth of all endless flights is that no flight is endless. In order, perhaps, to be a human story, that which is beyond us, in the sky, must come down and dwell with us here, even if it means breaking. Icarus, Prometheus and, in ultimate form, the Incarnation are such as this. Playle here adds a unique example.

Staff Essay: The Door to the Imaginal Realm

This issue, MP Mann contributes a look at the world between. Myths, she says, are access points to what is sometimes termed the Borderlands. Mann argues in plain and concise terms that myth provides us a specialized ontology and epistemology. So go ahead, walk thru The Door to the Imaginal Realm. 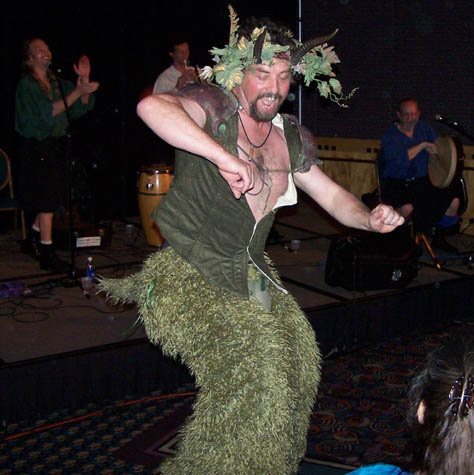 Can't get away? Scared of Deepak Chopra? Just don't like to leave the house? If you couldn't go with Associate Editor Mary Pat Mann to the latest Mythic Journeys Conference, she can still take you there in this virtual reality tour dubbed "Magic in Atlanta". Stay close, though; they have a giant.

Mytholog, Spring 2005 we published the poem "Fairy Tale Ending" by Marsheila Rockwell (author of Legacy of Wolves, Wizards of the Coast, 2007). The poem was nominated for the 2006 Rhysling Award from The Science Fiction Poetry Association (SFPA). The awards, given since 1978, are considered to be the equivalent for speculative poetry of the Nebula Awards for speculative fiction.

Danny Adams, who gave us "How To Be A Gracious Host To Your Alien Conqueror", likewise won a place in The 2006 Rhysling Anthology for "Utnapishtim on Friday After Dessert".

Elizabeth Barrette, author of about a dozen poems published in MYTHOLOG, as well as "Beaver Goes to a Party", got the 2005 nomination for her poem "The Poltergeist of Polaris". Incidentally, Elizabeth also spoke at WisCon 30 (May 26-29, 2006). Jane Yolen was a guest of honor this year. For more info, visit wiscon.info.

Likewise, Mary Pat Mann went to Mythic Journeys this year and wrote a travelogue, featured in this issue. 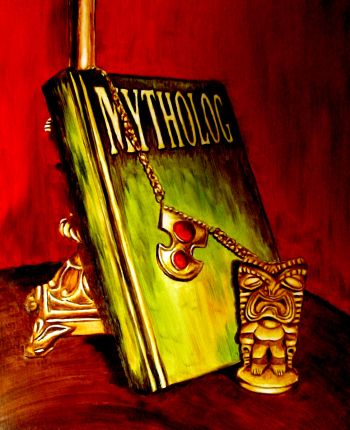 Author and Baen Books story illustrator Paul Campbell conveys the warmth of the season with our scorching Summer cover.

"Gurus do not have Subaru RVs."

"You've got two wives and I've got one bullet."

"October is the month of her mortification."

"The Safat live in the sky."

You've spent all that time polishing it. It's got a plot. It's got scintillating dialogue. It's got a real ending. And the theme is universal. Have we got a job for you! Look slightly to the right, and envision your piece in these pages, the payment in your bank account, and our gratitude. We're looking for a few good stories, and poems, and reviews, and graphics, and essays, and flash fics, and graphic shorts, and ... did we mention genre? That's because the genre doesn't matter. If it's got a universal theme - passionate love, the quest for survival, the fear of the dark... we're interested. Just read the guidelines and leave it on our doorstep. We'll take very good care of the little fellow.

The Door to the Imaginal Realm
Mary Pat Mann

Tim Hoke
Senior Proofer, Tim's been with us and on the proofing team since the beginning. With a penchant for faery folk and military themes, one of his stories also spawned two dryad-themed covers. Tim also has the singular distinction of being the first author to use the F-word among our pages. Betchya didn't know that, eh Tim? Yep, we love him. And each issue he rallies the proofers and ensures that you won't trep over spilling and and grammar mistooks. Hats off to Tim!

Rod Walker
Rod deserves special thanks this issue for proofing the whole thing. In the wake of Tim's computer giving him the bird, Rod swooped in and scooped up the fine text you see here. Call him "Hot Rod" for that kind of response. Thanks, Rod!