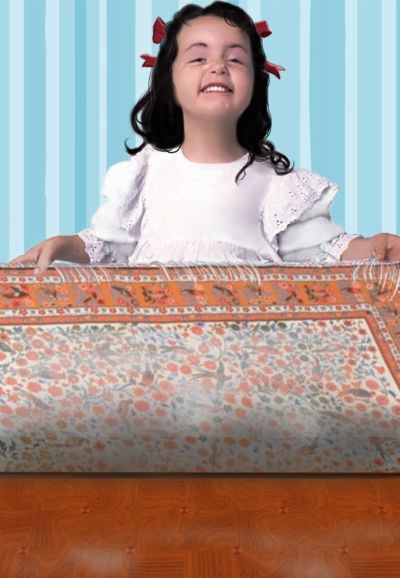 Sunday, Sissy's favorite day. When she gets to her mother's house she is given a gelatin salad to hold.

Sissy nods, looking at her mother's stairs. The rug at the bottom is braided strips of rag pressed into a circle. Sissy has a matching one in her kitchen. Her mother gave it to her for her birthday.

If Sissy stands in her kitchen and looks out the window, she sometimes sees her mother drinking a cup of tea. Sometimes Sissy waves at her. Her mother always waves back.

Is always watching her.

Sissy lives next door to her mother because her mother bought the house when it came up for sale, packed up all of Sissy's things, and moved her into it. It's a nice house, with flower beds out front. Her mother likes the flower beds. Sissy likes the rocks that lie around them.

Inside Sissy's house, there are no stairs.

There are no stairs because Sissy fell down the ones in her mother's house when she was young, swung one foot out towards them and then tumbled over and over and onto the wooden floor at the very bottom. There wasn't a rug then.

Sissy felt fine after she fell. She could move her arms and legs. She could blink and say her name. She felt fine, but she wasn't. Something had jostled loose inside her, broken. Her mother held her tight when she told her, then cried and held out her arms for Sissy's father. He slid into them and held her like a shadow.

Sissy had tests, slid strapped into the dark, into machines that hummed loudly around her. She stood still and held her breath while someone took pictures of the inside of her head. She doesn't remember her father being there but her mother says he was. She says he didn't want to leave them.

Her cousin Charles's voice sounds a little like her father's, or at least Sissy thinks it does. Charles's real name is Buddy but he doesn't like to be called that. Sissy works where he does, at the car dealership his father owns. She files papers.

Charles sells cars. He wants to move far away -- he tells her that every Sunday during supper -- but he lives at home and works for his father instead. Sometimes, at the end of the day, he comes by and says, "Bye, Sissy." His front teeth overlap a bit and she loves their crooked slant. She loves the five freckles on his nose. She loves the way he eats corn chips with his mouth open wide. She loves him because she always has.

Her mother loved her father that way. She used to say she loved him more than anything. Sissy remembers sitting at the kitchen table and hearing her mother say that every morning, her voice so happy it was like a song. Her father always listened and then asked for the sugar, stirring it into his coffee slowly. Silently.

One morning, Sissy woke up and he was gone. Her mother never said where, but she threw out all the coffee, wore black, and cried. The neighbors brought casseroles and talked of moving on. One of them, with pink lipstick and glittering eyes, asked where his car was, and Sissy's mother said, "Get out."

Her mother lets her carry the gelatin salad down the four blocks to Charles's house. Sissy watches it wobble under the plastic dome. It shakes like it might break, but it doesn't.

The day she fell down the stairs, her mother cried. She cried before Sissy fell, loud sad sobs as she stood holding the phone that sat on the dresser in her bedroom. Sissy sat by the stairs, leaning back so she could see inside her parents' room. Her mother wiped her eyes and dialed the phone, fingers flying and shoulders shaking with stopped-up tears.

Sissy shifted and wrapped her arms around her legs, over her knees. Her mother hung up the phone and turned towards her.

"Don't worry," she said. "I know how to make sure your father comes home."

She did. Sissy thinks of that whenever she sees the rug lying at the foot of her mother's stairs. She'd like to learn how to make one someday.

Charles's house smells like ham. At dinner it lies in pink slices on Sissy's plate. Charles sits across from her and frowns whenever his father says anything. Sissy clears the dinner plates and her mother dishes out dessert.

"I got a job at the dealership in Millertown," Charles says before anyone can take a bite, his voice too loud. "I'm leaving tomorrow."

"You are not," his father says, but his voice is weak, not strong like it is when his cars surround him.

"Leaving?" Sissy says, and looks at her mother.

Her mother takes a bite of gelatin and closes her mouth.

After dinner Sissy walks home, trailing behind her mother. At home, her mother unlocks her door, tells her to drink a cup of tea and take a nap. Sissy sits in her kitchen and makes tea, watches her mother watching her.

She leaves the tea untouched on her counter when she sees her mother go upstairs.

Inside her mother's house, Sissy walks to the rug at the foot of the stairs and lifts it up, baring the floor underneath. The wood is smooth under her fingers, the stairs quiet under her feet. When her mother opens her bedroom door, Sissy is waiting.