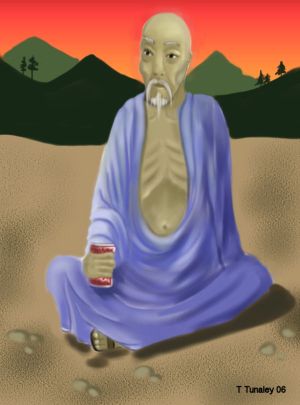 As Danny crested the last rise, picking his way amongst the stones and scrubby vegetation, the image that came into view wasn't the one he had anticipated. He wasn't quite sure what he had been expecting, but it certainly wasn't what he was seeing.

"Hot, ain't it?" said the man in the lawn chair, though he didn't look hot at all.

Where was the dhoti? Where was the begging bowl? Where was the skeletal figure with the beatific smile? This guy was wearing shorts and a Grateful Dead T-shirt. He was carrying at least twenty pounds of excess baggage and he had a West Coast accent. What the hell was he doing halfway up a mountain in Northern India?

"Wanna beer?" Without waiting for an answer, the man in the lawn chair underarmed a can in Danny's direction. Danny caught it easily, the metal cold against his palm. Almost without thinking he popped the tab and foam flowed over his thumb. "Whoa," called his benefactor, "spill blood, not beer." He raised his own can in salute. "Cut the dust." Then he took a long pull before belching resonantly. "Coming through." He gasped.

Danny took a long hit from his own can, then gritted his teeth as his stomach cramped, shocked by the sudden arrival of half a pint of ice-cold beer. His head began to throb in sympathy. Fuggit! A brain-freeze, too. Danny closed his eyes, absorbing the pain. He opened his eyes again when he felt a sudden inexplicable warmth on his forehead. The man in the lawn chair was now standing beside him his right palm on Danny's forehead, his left on his back.

"The hell am I doing? Giving you Reiki, friend, energy healing. Fix your headache and bellyache all in one hit. Magical stuff."

"Did I know? I have drunk too much cold beer on a hot day not to know what can happen. And your face said it all. Now just relax for a second while I fix you up."

Danny stood still, feeling heat on his forehead and a strange calm flowing through his body. The man also stood still, his head tilted to one side and his eyes closed as though he was listening to some very faint sound. After a couple of minutes, he opened his eyes, let his hands drop to his sides and said, "That's it, you're cooked."

"Got Led Zeppelin that time," he continued as he ambled back to his chair. "Get music whenever I do Reiki. That time I got Zepp."

"Cool," said Danny and then, "thanks." He ran a quick mental check on himself and realised that not only had both his headache and bellyache gone, he felt quite serene. This was becoming a very bizarre day.

"Then don't be." The stranger grinned and offered another beer.

"Thanks." Danny walked over to take the can this time then grabbed a plastic crate to sit on. He tossed his empty can into the fifty-gallon drum where the man's can had just landed.

Danny popped the tab but sucked up the foam this time.

"You sure?" The man looked at him, his lower lip pushed out as though he were contemplating some profound mystery.

"Well, I came looking for a guru and I found you."

"So the bottom line is: this trip was a total wipe, right?"

"Damn, that's too bad. If you wanna sit a spell, I'll give you a lift back to town after sunset. The sunsets here are outta sight."

Danny shook his head again. "Thanks, but I think I will get on back. You look kinda chilled here, and frankly I feel sorta down right now. Disappointed and all, you know? I guess, I don't want to screw your space with my bad vibes."

"Sure. 'Preciate the thought, buddy. You take care now."

Danny nodded, turned, and faced the long trudge back to the valley. As he set off he looked out over the mist laying on the tree-tops and the birds riding the thermals and was suddenly aware of the truth of what the man had said. He hadn't appreciated a damn thing. He was one sad sonofabitch. The only reason he had chosen to walk down was so he could hate every step. How unbelievably pathetic was that? That was why he had turned down the offer of a lift, so he could righteously claim a totally suck-ass experience with no redeeming features at all. Perhaps he should stay and watch the sunset after all; that should royally screw it.

Danny turned around again, and got his second surprise of the day. A tiny, emaciated, nut-brown man in a dhoti was sitting on a blanket regarding him with wry amusement.

"Life is an illusion," he said. "You create your own reality, light and dark. So, choose your world with care."

A can of Budweiser, dripping condensation, manifested in the man's hand. "Wanna beer?" he asked.

Bio: John can be found, assuming you have lost him, in a sleepy little place called Dubai. He has been hanging out there for over ten years now and it's kinda become a habit. John writes for a living because he is too lazy to do any real work and because somehow people keep taking pity on him and publishing his stuff. John could become a beach bum, but he lacks the ambition and drive to achieve that kind of focused lifestyle. John is gathering material for a couple of books, so if you have any words you're not using ...