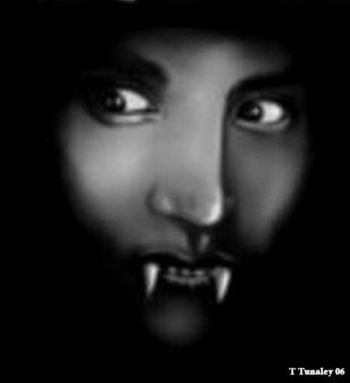 I took up my usual pitch at the corner of Tenth and Main and looked down the long, empty, snow-frosted street. Day was just easing into dusk, the light leaking away into that strange twilight time which is not day or night but hovers uneasily somewhere between the two realities: the realm of the predator and the realm of the prey. I heard a tip-tap of heels approaching along the sidewalk and waited to see what tasty morsel might be coming my way.

She was tall and stick thin with a long narrow face, from which her black eyes bulged obscenely. As she walked, she leaned forward, as though her feet didn't quite know where her head wanted to be. Her purse was held high up on her flat chest, and she clutched it like she was either going to force it on the nearest mugger or grandstand a touch-down from the twenty-five yard line. Either way, I slid back into the shadows behind the dumpster. My nose had started to twitch and drip, a clear sign that she was best avoided.

I wiped my nose on my sleeve when she'd passed, I didn't dare move before that, in case she saw me. She looked as though a sharp breeze would cut her into kindling, but appearances can be deceptive. I dont understand why I react like this. I just know its best not to ignore it. I ignored it once and could've lost a helluva lot more than just that lump of meat out of my leg.

It was nearly an hour before he came by. There had been others, but none worth the effort. I'd had to stamp my feet against a cold I didn't feel, and look as though I was just hanging out. But this one - I began to salivate - was almost too good to be true. I guess it was the jowls that made him so attractive - that and the broad retrousse nose and thick pink lips. It was a change for my mouth to water instead of my nose - so, as he trotted up, I sidled across the sidewalk and went into my spiel.

Sumbitch, he grunted, every bum in Brooklyn dressing up like Santy Claws anputtinthe bite on you!

I grinned and ripped his throat out just as he cried Wolf!

Bio: John is not a great fan of Fast Food, but he loves a freshly made BLT.