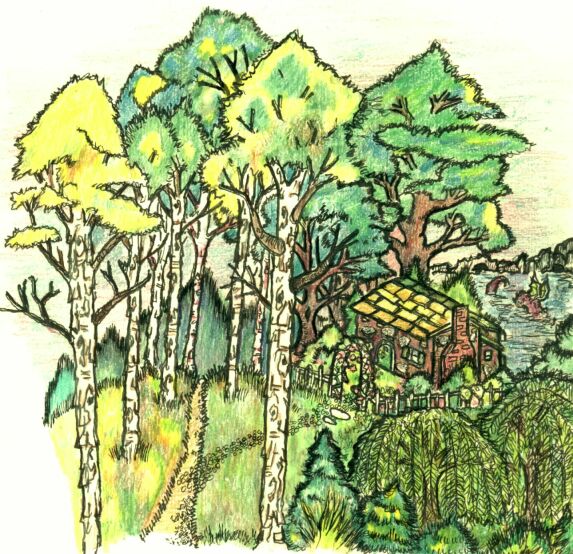 One day you are walking down the street. It’s been an O.K. day, but the city is getting to you. It’s noisy, dirty, and they’re tearing up the pavement outside your office window. So you knock off a little early, and now you’re heading toward the park.

There aren’t so many people around today, which is good. Your favorite path skirts a grove of trees. Off to the left, there’s a smaller path you’ve never noticed before. You decide to take it.

The trees are thicker here; branches reach over the path to shake hands with their neighbors across the way. Birds flit through green leaves overhead. In the dry leaves underfoot, squirrels search endlessly and chipmunks chase each other. There’s a flash of white ahead--a deer’s tail, raised high? Some kind of bird? You follow it.

The path dips down into a hollow, then begins an upward swing. Just when you decide you are totally lost and slightly alarmed, the trees open up and you see a white picket fence. A gate stands open under an arbor thick with roses. Their scent, heavy in the evening air, is so familiar. This looks like home.

Inside the fence, the gravel path winds through beds edged in thyme and lavender. Rosemary bushes jostle Michaelmas daisies. More late roses nod over snapdragons. Thorny stems bend under one more handful of blackberries. Beyond the garden, a blue rowboat swings out into the current from a tidy dock. There are rustles and murmurs all about, but no one appears, not even a cat.

The cottage door is round, painted green, with a knocker to it. It, too, stands open and the scent of fresh bread pulls you through the door. You have to bend your head. The parlor has a view of the kitchen garden. Inside, a small fire burns merrily in a pretty grate good for roasting chestnuts or toasting crumpets on long forks. It’s a place for plump women in aprons, uncles in padded robes with pipes in their pockets, children, animals who talk, and their friends. A place where travelers gather before setting out on a journey, or lost creatures find solace on a stormy night.

That night you sleep in a trundle bed under the eaves. The housekeeper tucks you in with a cup of hot chocolate and leaves a candle beside your bed. She banks the fire before she leaves. You dream of apples, ponies, acorns.

After a late tea, you sit reading in a study overlooking the street. This room is book-lined and Turkey-carpeted, with dark oak paneling and burgundy velvet upholstery. Two club chairs flank a modest fireplace. A square table behind them holds the remains of the tea waiting to be cleared away. Two straight-backed chairs stand askew, their occupants called away on urgent business. A Meerschaum pipe rests negligently on the mantel. Incunabula, a fine collection of Donne, and slim volumes of modern poetry lean against books on criminology, obscure reference works, and a treatise on bees. The day is foggy. Already streetlights glow through a gray nimbus.

This is not what might be called a woman’s room, the only female visitors being the housekeeper, chambermaid, and (by appointment) pale and anxious ladies who lay their stories before the now-absent experts. And yet, tall bronze chrysanthemums stand on the sideboard. Beside the vase, a pair of small leather gloves. One pair of the brogues drying next to the fire would never fit a man’s foot, and a silk scarf lies draped over the back of one of the chairs. Is that the new Vane mystery on the table?

Tonight you move to the spare room. Comfortable, to be sure, but a lingering unease leads you to check under the bedskirts. No one lies concealed, but the bed has been bolted to the floor. You notice an open grating high in the wall, and a bell pull that does not work. When the house is quiet, you roll up the blankets, grab the pillow, and move back to the study. Two club chairs pulled together are not uncomfortable, but you dream of open razors, corpses lying in empty baths, and huge black dogs that bark but make no sound.

You wake to find yourself lying on a rough pallet filled with straw, covered only with a single blanket of scruffy wool. Startled, you look around. Shields, body armor, lances, pikes, helms of all kinds are stacked around the room in jumbled profusion. Perhaps your sense of danger has conjured this profusion of weaponry. Broadswords rest against the wall, their pommel stones gleaming dully in the dusty sunlight. Chainmail hangs from hooks on the wall, tankards of ale stand half-empty on a plank table. Ah, the armory.

In the corner, a winding stair cuts deep into cool gray stone. The next floor holds the chapel where knights keep vigil before journeys. Stained glass illuminates a golden chalice on a carved oak altar. The stair winds up to a room strewn with pelts and hung with tapestries. Narrow windows admit a few rays of the morning sun, which strike the rounded back of a lute on a low bed. This room smells of cardamom and cloves, sage and cinnamon.

Above on the battlement stands a slim maiden. A circlet of red gold rests on her forehead. Her hand is raised, ready to release a merlin to the windy sky. In the distance, a band of knights, mounted on gaily caparisoned horses and with banners unfurled in the morning air, approaches the castle, home at last. Across the strand, bright waves roll crashing onto a rocky shore.

Underneath are wine cellars, dungeons, then subterranean caverns filled with silent passages. In secret fires, dwarves forge strange metals to craft heavy plate and goblets of weird design. Goblins creep about beneath the forges, stealing what they can and sticking knives in the backs of the unwary. In one vast forgotten cavern lies a massive hoard of gold and jewels mixed with bones and cobwebs, covered with thick felts of dust and guarded by a sleeping dragon whose breath rasps through scaly ribs. The dragon dreams of battle, opens a glittering eye, and subsides into sleep again.

Deeper still lie wet caves where the walls run slick with damp, water plips softly from the tips of long stalactites and rock flows in ribbons or stacks itself into delicate straws. Rivers roar through stone passages looking for a way out. After twisting a while through the darkness, they dump themselves finally into the ocean. At their mouths are sea caves used by smugglers on moonless nights. But you do not discover this until much later.