Welcome to the 4th Anniversary Winter Awards and Staff Issue. That's right, this issue has twin purposes: to recognize superb writing in our pages over the past four years, with our Fourth Annual Retro Awards, and to showcase several Staff Pieces that we think you're going to love. If you're snowed in under blizzard conditions, like our Chief Editor, or just can't find anything on TV that doesn't depress you (I'm about to watch the 9th film in the Sharpe's series - thank goodness for the BBC and Netflix!), you'll find plenty here to intrigue, tantalize, and even scandalize: Mary Pat Mann's two nonfiction pieces, a flash fic feast by John Ritchie, and a parade of award pieces from issues past. - Asher Black, Editor-in-Chief

Sam Spade (and Humphrey Bogart) termed a priceless art object, "the stuff that dreams are made of", but that hasn't stopped a growing number from becoming dream detectives that search for far more in their dreams and the dreams of others. Associate Editor Mary Pat Mann went to the PsiberDreaming Conference to do her own research. She takes us there in this report, a conscious journey across the liminal divide and into the unconscious, where the mind spends more active time than we might acknowledge. 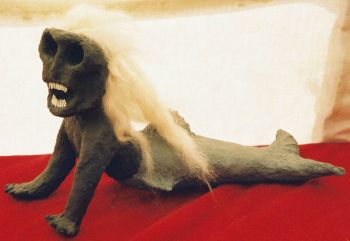 Sex or innocence? What is the mermaid's role in culture? For some of us, encountering them first as children, it was the possibility of something beyond. Mermaids represented the wish that the world not be an accident of binary mathematics, an anomaly that will one day work itself out, as the whole moves relentlessly toward entropy. We were in danger of the rigidity we were taught to impose on our perceptions becoming the object of those perceptions, and never escaping the prison of what we expect. Others encountered mermaids later in life, fascinated with their challenge to the conventions of sexual experience. MYTHOLOG asked Associate Editor Mary Pat Mann to write on the subject of Mermaids, and she has taken their story where she will. Complimented by illustrations from Teresa Tunaley and the mermaid mummy photo here generously provided by our star proofer, Rod Walker, she's given us an almost Fortean bestiary (or should we say anthropology?) of Mermaids in human culture.

Quick bite? Associate Editor John Ritchie provides us a seasonal snack, with this flash-fic contribution. It's illustrated by the illustrious, industrious Teresa Tunaley.

El Laberinto del Fauno (Pan's Labyrinth) is being billed in some quarters as high fantasy. It is fantasy, and pretty good fantasy, but to see it in its true light, you have to cast off the prevalent comparisons and the excess of adulation. Asher reviews this film in his usual idiosyncratic (perhaps even polemical) style. In the end though, he notes that a review is just an opinion.

Each Winter issue we do a retrospective of past issues - and honor a number of pieces that typify what we're doing here at MYTHOLOG. The Retro is kind of like our own Grammys, Emmys, or Tony Awards. We don't pass out statues, but we do call attention to literature that has made a distinct splash here at MYTHOLOG and for our audience. Past retrospectives have honored work by Mary Pat Mann, Em Wycedee, and Michelle Erica Green, among others. This year, we're giving the Retro and special applause to sixteen pieces, a number chosen for the number of past issues we've published. These sixteen, in alphabetical order, are:

It's been a pleasure to start our 5th year by honoring the work of so many. Frankly, it was tough narrowing it down. We wanted to give out twice as many awards. The whole Autumn Issue, for instance, was fantastic. The Spring issue is coming. Check in at the Newsroom to keep current on what we're up to between issues. The Forum (which we had down for a while) has also been moved to the Newsroom in a more suitable format for our community. For those of you who've submitted work already for Spring, rest assured, we're reading it all. :) 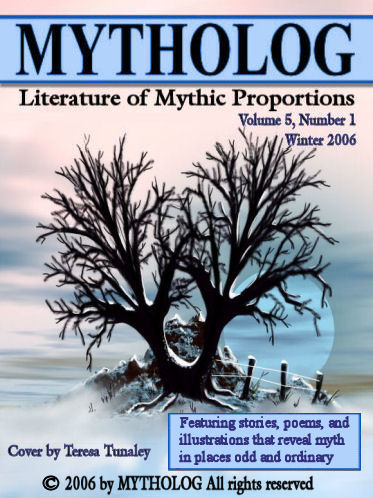 The superb Winter cover, by Teresa Tunaley, is an allusion to our twin trees logo and, by extension, to Yeats and perhaps Loreena McKennitt. It also has that solitary, sometimes forlorn personality that you can see in Teresa's covers from past issues.

"I recently spent two weeks with a bunch of dreamers exploring what counts as real . . . The uncertainties of science notwithstanding, every culture in history studied its dreams." - Mary Pat Mann

"For us, mermaids represent a mysterious but unsullied nature, something (or someone) that cannot be tamed." - Mary Pat Mann

"She looked as though a sharp breeze would cut her into kindling, but appearances can be deceptive." - John Ritchie

Craig Clarke
Every issue (except this one - most of our staff have been given a vacation) has to pass an all-important test before it goes live: The Craig Clarke test. That's right, Craig, our Copy Editor, makes it look like we all know what we're doing. After our editors work with the author to make each piece the best it can be, Craig corrects the large chunks of problems we've left in our wake, making consistent, clean copy, so our proofers can go in with their microscopes and fine tune. Craig is an avid reader and reviewer, and it's probably this blend that makes him such a superb Copy Editor. Incidentally, while his reviews are all over the internet, you may want to visit his home page: Craig's Book Club.