Leading this issue are three fictional commentaries on culture and conflict. You might say it's the Autumn of our discontent. There's also quite a variety this issue, our largest yet in fact (hence the temporary two-column layout). This quarter features intercession for the future, erasing the past, a fall and an intended fall... well, if you want the other themes, you must keep reading. Before that - a few announcements:

First, the Winter Awards Issue will feature staff pieces and the Retro Awards, which honor pieces we've published in our past issues. Second, the new MYTHOLOG Community, including the MYTHOLOG Forums: We're carrying on a collaborative story there, and running an Interstitial Short Fiction Contest. Want to know more? Read on, or click here. Finally, the MYTHOLOG Store is currently offering up MYTHOLOG mugs and blank 160-page MYTHOLOG journals. These and the other items there make excellent presents and fun ways to enjoy the season. Now, on to the current issue...

The Worldkeeper's Circlet by Arwen Spicer

What a pleasure when a story reaches out and confronts the reader. This one is about the very meaning and making of myth, seemingly so distant and yet able still to ask us what we truly value.

The Egg by M.H. Joyce

This is a story about what war does to the survivors, and about what we need versus what we are supposed to need. Teresa Tunaley illustrated this piece.

How easy it is to be caught up in doing what seems right, in protecting ourselves and our way of life - in driving back the things that make us feel unsafe. Stever's fiction asks the question: When we demonize others, what has happened to our own faces?

After the Fall by Bill West

How the world of children begins like the original world -- the world of origin -- the Edenic world from which, somehow, we have fallen. Have we not each been offered, and likewise offered to the innocent (whether as adults or as other children), an intimacy with - a "socialization" into - the brutal world of man? Perhaps that's why this story reads itself to us in the second person.

Jack and the Magic Hat by Charles S. Cooper

Life seems, sometimes, like a competition between the interests of people who either view others as prey, or else just want to escape. This story is new, but the main character feels familiar. A traveller, searching for something elusive. Many of us, feeling equally lost, search with him.

The Cloud that Would Not Rain by Swapna Kishore

"I feel I want to rub everything out and start again." Have you ever felt that? If you could - if it were in your hands to do so - what would you? Here, Sarah Ann Watts has brought you what you need.

Is there a person you've lost (and aren't there many ways to lose people), and you simply can't bear it? What would you do to bring that person back? Elizabeth Scott frames the question like this: How desperate, how frail, is the human heart? Teresa Tunaley illustrates this one.

And the Moon Sees Me by Sarah Frost Mellor

A very nice piece of erotica. And we'll say no more. :) OK, well maybe not "nice". This is, after all, what the moon sees. Shhhh.

Turtle Car in the Mountains by Daniel Ausema 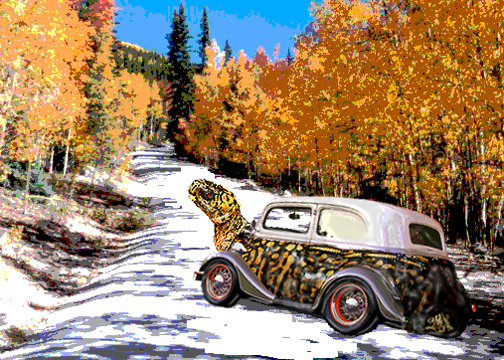 A bizarre look at the future and freedom. Illustrated, and the illustration featured on the issue's face, by Mary Pat Mann.

Ever wonder what the gamers and fantasy nerds are really doing in that booth in the back of the diner? Or gathered in that comic store basement on Friday nights - without dates? [Editors Note: "Hey, if tough guy Vin Diesel is a gamer nerd poster child, it has to be interesting."] Gunnells just keeps giving us a glimpse of this world, and we love him for it.

The Autumn Queen by LaShawn Wanak

Sometimes, thinking about Autumn, we grieve, if we're thoughtful, for all things dying, but we must also look forward with delight. Today, when I woke smelling the rain, I felt like this. Fall is a time of soft flannels, mugs of warm cider, walks through leaf-strewn woods, orange moons, and the smell of oak embers at night. Wanak reminds us of our lovely visitor. Illustrated by Teresa Tunaley.

A Fourth Lesson in Magic by Kristine Ong Muslim

How do your lovers grow? Muslim's poem explains one way. A lesson in gardening, this. And cooking your own homonculi.

There's another world beneath the surface and within our own, and the lives we live are layers that sometimes never touch, and sometimes just brush against each other. MP Mann gives us a glimpse at what looks back at us across this breach, and how we each call to the other for something out of reach.

Ever find yourself daydreaming, and then wonder how you got to where you are? Have you looked around, and the ordinary that became magical now seems ordinary again? That's what happens to John D. Ritchie in this tale of perhaps the nexus of all magic.

A story quotation from MYTHOLOG, and yours truly, the editor, has achieved the singular distinction of being an example in A Skeptical Look at the Abstract Syntax Approach to Word Meaning by Stephen Wechsler (University of Texas at Austin): "A fox," he gloated to the housekeeper once hed had off his coat. "A little one, too." -- Gifts (Black Asher series) by Asher Black. Asks Professor Wechsler, "How can He wants off his coat be prevented?"

As we mentioned above, you are cordially invited to further discussion of the arts, myth, literature, publication, film, and other such topics in the MYTHOLOG Community Forums. Interested in picking an editor's brain? Want to interact with other readers, authors, and visual artists? Care to join the ongoing collaborative story? Just click on Community here or above. Incidentally, we're running a contest; to get the details, however, you must visit the Forums.

Newest Associate Editor
John D. Ritchie, who has joined us as one of the Associate Editors, can be found, assuming you have lost him, in a sleepy little place called Dubai. He has been hanging out there for over ten years now and it's turned into a habit. Besides editing, John writes for a living because he is too lazy to do any other real work and because somehow people keep taking pity on him and publishing his stuff. John could become a beach bum, but he lacks the ambition and drive to achieve that kind of focused lifestyle. These are John's words, but it makes us think he's a perfect addition to MYTHOLOG's international staff. Welcome aboard, John!