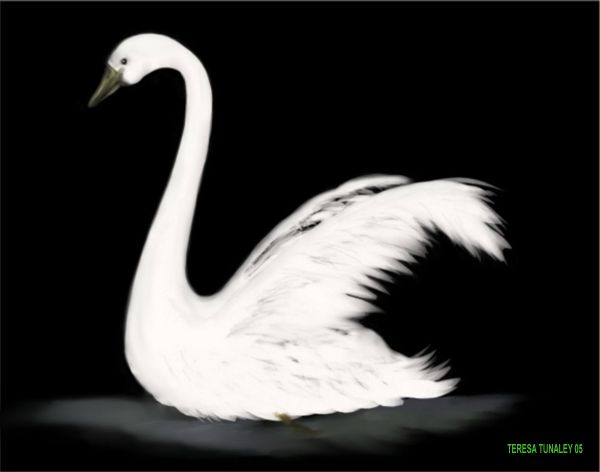 Soaring through a sky of scattered gold,
wings outstretched, white tips reaching like fingers,
the curving necks a thing to spark desire
in the coldest heart that looks on what is fair
and turns away; these creatures hold the eye.
Such is the beauty of swans.

But what is in their hearts, these swans
who fly in pairs linked each to each with golden
chains? May be the hard black eyes
were bluer once, or hazel. Once fingers
spread where now white wings fly fair.
Caught in a net of beaks, they might desire

lips and toes and skin that show desire
in blushing flushes, not white like swans.
These are the fifty maidens fair
ravaging the plain, devouring the golden
grain, they lure the warriors on, whose fingers
reach for spears even as they doubt their eyes.

Each man holds tight his spear, a swan fixed in his eye.
He knows his aim is true. His sole desire
now to strike, to wound, and then with careful fingers
separate the feathered skin from this apparent swan,
the skin he'll hide away like precious gold
to hold within his arms the lady fair.

She marries him. It's only fair.
She is his prize of war, the apple of his eye.
He decks her out with ornaments of gold
and comes to her flushed full of his desire.
But she begins to dream at night of swans;
waking to wings, she finds only fingers.

He strokes her cheek with one brown calloused finger.
She turns her face to his, the skin so fair
it calls to mind the whitest down of swans.
He thinks he sees, then, something in her eyes:
a longing not for him, an old desire
to fly apart from every chain of gold.

Her outstretched fingers reach for him, the golden
lord whose fair deed saved her from the fate of swans;
yet still her eye is clouded with divided desire.