Pope Leo the third, to the Cardinal-Deacon Benedict, on Charlemagne: :

What burden is it, my lord Benedict, that lies so heavy upon the back of me and this age? Why have I been made a bishop? To become what I have let history make me, compelled to be a clerk to two Emperors, alike only in their mutual opposition to the other? 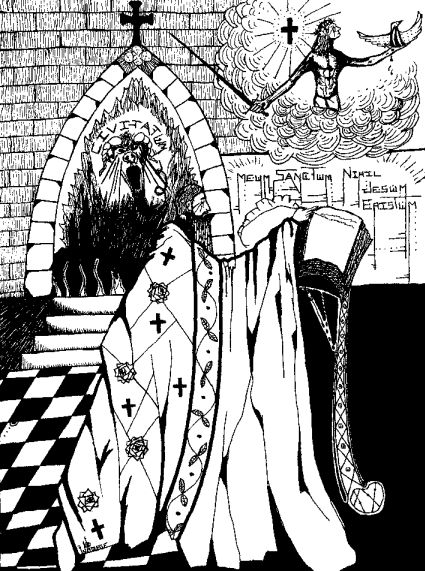 Take a long and searching look down to the depths of me and perceive there, my lord cardinal-deacon, a man of contradictory personae: one the bold and crafty statesman for pious and curial eyes, but here, in private, thou dost so often see beneath my outer masks to the inner me: to a man without a person inside, confronted by the swift current of events, cloaking the truth of the Lord Jesus Christ in words of a double aspect, and inventing a new pose to meet each crisis in its time until exhaustion, or death, or both, o'ertake me, to a soul long ago dissipated in the polar opposition it sought to deny, until the "I" in me is only an actor playing the parts, an insubstantial matrix of ephemeral relations.

Take a long and searching look down to the depths of me and perceive there, my lord cardinal-deacon, the pattern of that matrix drawing its dialectical lines clean through me: I am Latin in prayers but Frank in matters of state, I am a secretary to Two Empires who would be a minister to neither; a subject of neither yet a traitor to both; an unwilling apostle of Christ and the willing tool of Caesar; I have the saints, but Charlemagne the swords; I have a cathedra, but he the imperium; and so history doth repeat itself: I am at Paderborn again.

So what decision is it, my lord, that I can make that will not be subject to misinterpretations in the guise of scholarly commentaries by legions of scribes, editors, and bureaucrats? How oppose Charlemagne when he hath many quills and I but one? How, when those skilled and technical pens will contrive lone and learned tomes and elegant phrases to make me say what I have not said?

And so I have come to discover to my own disconsolation that history doth not have the shape I believed it to have. Too late have I recognized that this mitre proffers nothing but loss, infidelity, chances, and lies wherein I had sought their opposites. And therein, my lord cardinal-deacon, is the principal player: Opposition. At last and too late have I discovered that this subtle dialectic and all its oppositions hath been woven with an artful craft and seeming piety into the Frankish Trinity between Persons in simple truth and essence not opposed.

Take a long and searching look down to the depths of it and observe this: that the oppositions themselves have become the Persons, the utmost in artificiality: The Names "Father" and "Son" follow logically upon the given abstraction of opposition, and voilà! all that is said, is said of One, and Man hath discovered a sufficient reason behind God. And thus today they shall say One Thing of God, and because dialectic is God, tomorrow they will say the Opposite, God-is-not.

O but Thou Who Art beyond all dialectic, help me! For I must oppose will with will, and mind to mind, and one dialectic with another: Look, Benedict, look at what I am being asked to do. I must undecide decision, undo what is done, oppose falsehood and in so opposing, oppose an Emperor, who, once favoured, will not thereafter be opposed.

Charles! Charles! Charles! Did I not play the most crowning act, presuming to grasp unlimited power, and in giving it away, to keep it, by an unspoken and unconditioned artifice? I was a fool! Did I full surely think by crowning him "Emperor of the Romans" to vanquish his ambition and frustrate his design, snatching the diadem away at the same time I gave it him? Is it not the reverse? In that now irreformable act did not that remorseless dialectic master me? Did I not vow as bishop of this See to defend this Roman flock and this Roman faith? And in fleeing those many years ago to Paderborn, to Charles, to Caesar, did I not fail both vow, and flock, and faith, when that holy trinity demanded my blood? Tu es Petrus! Indeed! Am I not like Peter, denying my Lord like the coward I am? Or am I Iscariot, delivering Holy Tradition into Caesar's hands? How will I make this decision, Benedict, when I am a hypocrit, and found wretched, and hanging upon a prince's favour?

The other installments in the Mosaic Soliloquies can be read in our serial archives.