The Edison Tower was built in the 1980's, during a time when modern things made a huge leap towards popularity. Concrete buildings popped up all over, much to the dismay of Greenpeace activists and tree-hugging environmentalists.

The Edison Tower stood, tall and phallic, in the downtown core of Ottawa and was home to many businesses. It was also home to the largest horde of pigeons this side of kingdom come. Hence the building's nickname, “Dive Bomb Alley”.

The building was a huge monstrosity. A massive “modern” structure of brick, mortar, concrete, and glass. But it differed from other monstrosities of its kind in one notable way. It had a thirteenth floor. Not a thirteenth floor that is labeled the fourteenth, but an actual floor numbered thirteen.

It is common knowledge that few buildings have a thirteenth floor, due to the unpopular and unlucky qualities the number possesses. But the architect of the Edison building, one Harold Robinson, didn't subscribe to something so namby-pamby as superstition. He was a sensible man after all, and sensible men kept their heads above their shoulders and above water.

The circumstances surrounding his disappearance are still debated to this day. No one is really sure what happened to the uptight, grumpy man who used to wander around his creations looking for faults. He would be seen many a lunch hour, looking at the marble in the lobby, the DayGlo paint in the first-floor smokers' lounge, the tinted glass windows in the penthouse office. He was always around, which is why it was so odd that one day he just wasn't there at all.

Marjorie Velquist, the receptionist in the lobby, was the first to suspect some sort of foul play. On June 9th, 1987, three years after the building's creation and two weeks after the disappearance of its creator, Marjorie approached her boss.

Valerie Stevens was a little blond harlot who had slept her way to her present position as head of Human Resources. Marjorie hated her. Valerie was an uptight, snobbish, prudish egocentric with too much make-up and far too much hair spray in her teased bob of bottled blond sunshine. She was also an outright bitch and wouldn't think twice about stabbing anyone in the back to get what she wanted. Marjorie was not alone in hating her. Some even loathed her. One person actually wanted to kill her.

Marjorie knocked on the door, opening it when she heard the terse “Come!” from inside Valerie's office. Today the harlot was wearing a little black power suit with a skirt so short the whole world was her gynecologist. Hate bubbled under Marjorie's skin.

“Marjorie. It's about Mr. Robinson.”

“The architect? What about him?”

“He seems to have disappeared.”

“Whatever. I don't have time to worry about one lost architect. You go look for him yourself. Do it on your lunch break, mind. I don't want you wasting company time.”

Marjorie bit her tongue, closed Valerie's office door and headed outside for a cigarette. She needed to breathe fresh air and kill her lungs a bit at the same time. She was always very good at multi-tasking.

She lit a cigarette, struck once more by how warm it was for an early June day (thank you, Global Warming) and took a puff. Smoke invaded her lungs and she was grateful for it. Despite what her doctor said about smoking being bad for her, it calmed her and reduced her stress level. She paid homage to the Nicotine Goddess daily. Several times daily.

As she smoked, she began to think about Harold Robinson. Where the hell would he have gone? Before talking to Valerie, she had phoned his home, his office and his mother's, all with no answer except for Mrs. Robinson's. His mother had sounded distraught.

“Have you found my son?” she asked.

“No, but I'm going to find him.” Marjorie assured her.

The woman seemed to repeat the word as if it were her new mantra, begging. It was the please that made Harold stick in Marjorie's memory so vividly. Dark whip of hair, dark eyes, pale skin. Kind of sexy in a cannibalistic bad boy sort of way. She wouldn't rest until she found him. Or had at least tried her best. You couldn't expect a miracle on a half-hour lunch break, she thought.

But where should she start? There were a number of places, she was sure, that a person could disappear to, but she had no idea about the kind of place Harold had favored, let alone frequented. She decided to start in the spot that Harold was famous for: the 13th Floor. It sounds so ominous, she thought, as she stubbed out her cigarette. Like it's a curse or something. She chuckled to herself, watching the elevator numbers light up as the elevator made its descent. Her chariot was here.

The doors opened with a bing, and she stepped inside. She pressed the number “13” and watched as the doors closed. Marjorie had never been to the 13th Floor. There had never been any need to go there. She supposed she ought to have checked it out sooner, but there weren't even any offices up there, everyone being wary of the lore surrounding it. She wasn't sure what she was expecting to see, but certainly not what her eyes beheld when the doors slid open. 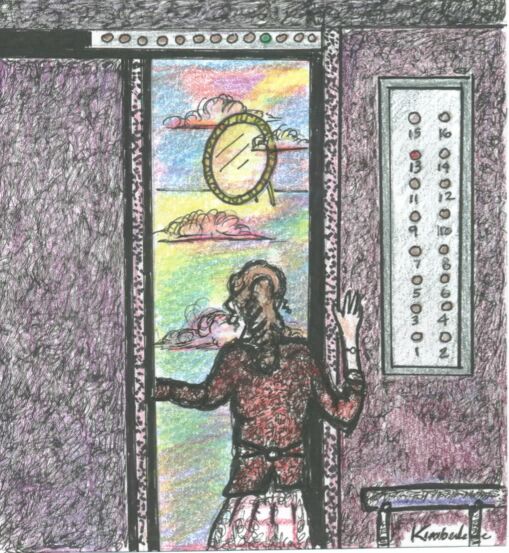 In the centre of the room was a large, round mirror. It had silver scrollwork around its edges and words written in amongst the design. She approached it slowly.

There was nothing else on the entire vast floor but this mirror, no light but from a few cracks in the hundreds of blinds where sunshine was sneaking its way in. But the great, empty room, especially the area in front of the mirror, seemed to glow, the floor itself shining in a silver frost. Marjorie found herself aching to touch this frosty stillness, this glowing beacon. But she approached it slowly. Carefully, bending close but keeping her hands to herself, she read the writing.

Desire bleeds into fantasy and fantasy is nothing but dreams made into reality.

Marjorie puzzled over this. Surely it was a strange thing to write around a mirror? She stared at it for some time, waiting for some inspiration or sign to come to her. When none did, she reached out and touched it.

Two things happened. The air around her suddenly became chillingly cold and still. And her hand sank into the mirror.

She pulled back in shock, her skin cold and clammy. She stared at her hand as if it were some foreign object that belonged not to her body, but someone else's. She was left with a feeling of awe. And one of certainty.

She was certain that Harold Robinson had stepped into this mirror. Perhaps he had stumbled upon a gate to another world, to some great expanse of imagination. Perhaps this was also the reason that there were no thirteenth floors in buildings; they tore the fabric of time and space. It was a shot in the dark, but she didn't have that many bullets to begin with and she might as well make the shots count. What's on the other side? She thought.

Knowing she could not turn back now, and having nothing much to live for (a dead end job, no family, no boyfriend, no savings), Marjorie Velquist made a decision. Feeling a bit like Alice through the looking glass, she stepped into the mirror...

...And into the world of dreams made into a reality.

“... the circumstances surrounding her disappearance are vague. Witnesses report seeing Ms. Velquist enter the main elevator from the lobby of the building around 11:30 a.m. on the 9th of June. She never returned.

“When interviewed about Ms. Velquist's disappearance, her former employer Valerie Stevens said that she is sorry for the loss. “Midge was a great employee. She will be missed.”

“Police ask anyone with information regarding Ms. Velquist's whereabouts to contact the regional police at....”

The thirteenth floor is bathed in light. Cool and crisp, it seems to come from the mirror. You approach the mirror slowly, cautiously. There is no sound but the far-off laughter of a man and a woman. It seems to make the floor colder.