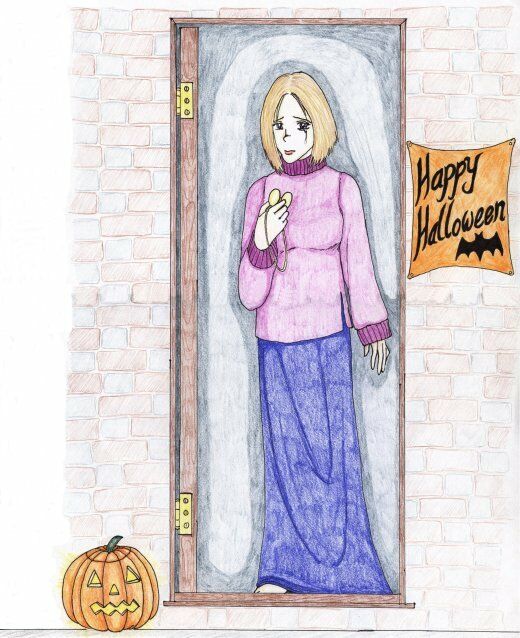 Caro looked out the window. Fall was partway done, and Halloween was fast approaching. In three days time, hobgoblins, ghosts, and witches would roam the streets looking for candy or for tricks.

She smiled. Fall was always her favorite time of year and she loved Halloween. Always had. Perhaps it had to do with the idea of make-believe, that it was a time of year to be something that you weren't. She knew there were legends of the living dead and that for that one night, before the magical hour of midnight, they could roam the earth. How real were the legends, though? She pondered.

She had just returned from shopping for Halloween candy and was coming up to her front door when she noticed something. There was a black and white photograph stuck into the wood with a silver pin. She pulled out the pin and studied the picture. There was a woman in her mid-twenties holding the hand of a rather solemn looking girl. The girl's hair was windblown (perhaps they were on a picnic on a windy day?) but her eyes were what drew Caro's gaze.

The eyes of the girl looked old, as if the soul she housed was older than time. But the girl only looked to be about twelve. Caro flipped over the picture. A spidery cursive hand had written: Emily with mother, 1929. Emily. What a pretty name.

She entered her house and went to the fridge to pour herself a glass of wine. There was another black and white picture stuck to the fridge door with a large magnet shaped like a ladybug. The woman in the picture was in her mid-to-late teens, again with a solemn expression on her face. Caro flipped it over. It read: Emily, 1935.

A shiver ran down her spine. Dropping the new picture with the old one, she went into the livingroom to check her messages. The light on the answering machine was blinking and the number one flashed at her. She pressed play.

There was a hiss of static and air and then, a girl's voice, small and somewhat afraid: “Caro? Caro? Are you there? Pick up. It's Emily. I need your help.” There was a pause, and more air and static. Caro thought she heard the little girl crying. “I guess you're not in. I'll try you again later. I, uhm....I really need your help, okay? I'll call you later.”

The next day, October 30th, Caro sat at a microfiche machine in the basement of the Ottawa South library. The only light came from the machine in front of her, shading her skin in blue and white. She flipped through decades of film until she found what she was looking for in the obituary section for 1936. The article read:

Emily Jefferson, age nineteen, was found yesterday in her home at 463 Willowlake Ave. She had passed away from consumption during the evening. Her family will dearly miss her. For funeral details, see page A 34.

Caro read the obituary three times. She shivered. A dead girl had tried to contact her.

She dialed up Poppy when she got home. Poppy was a reporter who worked for the Ottawa Citizen.

“So what do you think this all means?” Poppy asked, once Caro had related her story.

“I don't know,” Caro said. “It's just kind of creepy this happening the day before Halloween.”

“I wonder why the little girl is trying to contact you.”

“You don't actually believe this, do you?”

“Listen. If Emily's ghost if trying to contact you, it's for a reason. Don't you want to know what that reason is? I'd say stay on top of this one, Caro. You never know where it might lead you.”

Caro went for a walk to clear her head. The whole situation was starting to give her the creeps. She wasn't sure whether or not she believed in the supernatural, but the pictures couldn't be ignored.

She had always had an open mind where the otherworld was concerned. Maybe this whole ordeal was a test of some sort, to see how far her open mind would carry her. Having a visitation from a dead girl seemed an odd way to have her belief (or non-belief) tested, but, what the heck she could handle it. Problem was, she wasn't sure if there was anything to handle.

With a sigh, she headed towards A Second Cup on Bank Street. Perhaps an apple cider would cheer her up.

When she got back home, she studied the photos. It was definitely the same girl in both pictures. But what could this girl have to tell her? There should be a reason for contact beyond the grave, she just had to figure out what that reason was.

As if on cue, the phone rang. “Hello?” Caro answered.

“Why not you? Would you rather I go somewhere else?” Her voice cracked with distress.

“There are secrets in the attic.”

The phone went dead. Caro put down the receiver and picked it up again, only to be greeted by the dial tone.

The attic was dark and musty. Caro hardly ever went up here. Many things were left from the time when she had bought the house, and she had never had a chance to look through the contents. But tonight she would.

There was a light coming from a dark corner of the attic and Caro felt herself drawn towards it. What she saw was a large old wooden chest. When she pulled open the lock, the light disappeared. Apparently she had found what she was meant to look for.

From the chest, she pulled an old worn out diary. She read the last entry:

I told Mama today. She didn't believe me, and I don't really blame her. She loves him so much. I am just afraid of whether Harold will stay true to his threat or not. I sit here, in the dark, waiting. I listen to the words that are whispered in it, and wonder, will he come for me tonight? Will he snuff me out like a candle flame on a windy day for digging out his skeleton? Surely, sexual relations with his wife's daughter is a heady secret, but does it have to mean my death? I hear footsteps on the stairs. I will write more later if I can.

After reading the journal entry, Caro rushed downstairs to her computer. She began composing an article for the Ottawa Citizen. In it, she told how Emily Jefferson had really met her demise. While she wrote, she felt as if someone sat beside her, telling her what to say. The words seemed to flow out of her, and she didn't want them to stop. Finally, Caro looked over what she had written:

Years ago, in 1936, a young girl of nineteen died of consumption at 463 Willowlake Road. At least, this is what the authorities thought but arsenic was not a detectable poison in those days.

Unbeknownst to her mother and the rest of her family, Emily's stepfather, Harold Jackson, had been raping her for several years. Not one to cause a fuss in the midst of the Depression, Emily kept quiet. That is until Harold began to turn his gaze towards her younger sister, Jazelle.

Knowing that Harold had to be stopped, Emily ran to her mother and unearthed the skeleton that she had been hiding, only to have her mother slap her and beat her for trying to ruin her husband's “good name”.

Enraged at having his secret revealed--even to someone who didn't believe her--Harold poisoned Emily with a large quantity of arsenic and left her to die alone in her bedroom, where she was found the next morning by her mother, who died a year later from grief.

The reason for Emily's death has remained a secret for decades. Hopefully, now that the truth is known, her skeleton can finally be put to rest.

Children began arriving at Caro's door at about 7pm that evening and Caro handed out chocolate bars, licorice, and gum, along with coloring books and treats. She believed that children should have fun on Halloween. So what if she spoiled them? It was only one night a year.

The doorbell rang again and Caro opened the door only to look into the face of a petite girl, twenty years old with long blond hair and blue eyes. They regarded each other for a little bit before the girl reached out and put something in Caro's hand.

“Thank you,” the girl said, and was gone.

Caro pushed back a tear and opened her hand. In it, she held a small gold locket with the name Emily engraved on the front. Inside was a picture of a solemn-eyed young girl.