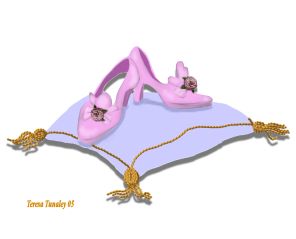 Her feet were the best because they weren't pretty. In fact, they were hideous: large, lumpy things, with dirt matted under the uneven nails and a large bunion on her left toe.

And yet, she stared at us as we were woven from gossamer. She slid those huge feet of hers into us, and we sparkled in the moonlight. We covered her blistered heels. We massaged the thick, callused soles. We caused her feet to glitter and glow.

We made her feet perfect.

Of course, we merely served as accents, along with the dress, the coach, the hair. But we were at our best when she danced, our heels clicking on the marble floor. No one could take their eyes off her, not even the prince. Especially not the prince.

When midnight approached and she fled down the steps, we were the ones to cause her to stumble. It was perfect -- one lone slipper left behind, askew on the staircase, sparkling in the moonlight. The prince couldn't help but stop and stare. His eyes widened. His hands reached out.

It didn't bother us, being apart. On the contrary, we had more attention lavished upon us than when we were together. Hundreds of maidens, jostling for position, trying on the slipper carried now on a silk pillow. Feet were bared, heels cradled, toes squeezed tightly together. Each reaction was the same: rejection, disappointment. And always the hungry, longing gazes.

And in secret, a longing of a different sort as she hid the one that remained from that magical night. Her sighs were soft, her glances furtive. Hands touching and stroking in disbelief that she was once beautiful. Her dreams and wishes, light as gossamer, contained in one solitary glass slipper.

The prince finally arrived at her house. Oh, the stepsisters tried, they truly did. They locked her away and denied her existence. They even applied knives to make their feet fit. Their blood dripped out, turning glass into ruby, exposing their falsehood to the prince.

We called to each other and she emerged. She offered her foot and we were reunited.

Now, we sit on a pedestal, day in and day out. Hundreds line up daily, wanting to see the slippers that turned a maiden into a princess. We let ourselves be admired, gazed at with adoration.

Sometimes, even she is among them.

We know that she still hungers for us. She wishes to take us down, to slide her smooth, pampered, softly perfumed feet into us. To dance with our heels clicking coolly on the smooth, marble floor. But though we remain, the magic no longer works for her. Her dream, after all, has come true. Therefore, she has no more need of us. And we have no need of her. We fight, we shy, but we will not fit her pretty feet.

And so, we remain objects of desire. We sit upon this pedestal, waiting for another dream. We have learned to be patient, and can do so with ease. And we know that our waiting will bear fruit, soon.

There is a peasant girl who comes here as part of the cleaning staff. There is dirt on her cheeks and hardness in her eyes. She eats very little, saving food for her family. At night, she dreams not of handsome princes, but of pitchforks and torches, and ripping pearls off an elegant neck.

We call to her at night, and restless, she rises, she comes. She gazes at us, hungrily.

We sparkle in the moonlight.