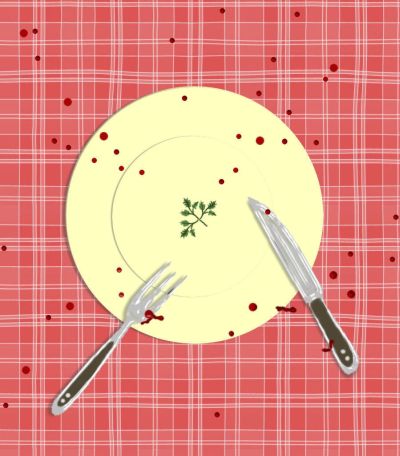 When Porter came home from the war, he could eat only hand grenades. The smell of barbecued pork ribs nauseated him. It puzzled him that even his most cherished meal had been replaced by an appetite for metal. His wife, however, was not impressed.

Lena suspected her husband craved special attention. After all, no televised parade had greeted him and his platoon. She imagined pitching a generous red-white-and-blue flag, like a carnival canopy, over Porter and the black footlocker of grenades. With The Star-Spangled Banner roaring in the background, she told herself smugly that the general public would be delighted to pay for a peep.

Porter ate one grenade a day, precisely at noon. He placed the little bomb on a plain ivory-white plate and garnished a sprig of fresh cilantro through the ring of the pin. He always sat at the vinyl card table under the kitchen window with its lone potted red geranium. Lena could not bear to watch Porter stare at his plate for an eternity -- a tableau of naked agony -- until he unhinged his narrow jaws and gulped the grenade whole.

The first time Porter performed this outrageous ceremony, Lena yelped as if nuzzled by a leper. She waited for him to choke. When nothing happened, she demanded an explanation. He had none. She mistook his ignorance for complacency and never spoke to him again.

Two months passed. They slept back to back in their shallow bed. Her heart became a furtive river stone. His despair was seldom relieved, and only by visions of an aerial void: the place where his body had no outline, where he didn't need to read the sky or himself. Then Lena decided to disguise a hard-boiled egg.

A difficult task, but the meticulous handiwork rewarded her. She stashed the egg among the grenades in the black footlocker. It was indistinguishable, right down to its false pin. More patient than a Buddhist nun, she waited.

After Porter digested every grenade, she would have proof that small explosives were not his sole source of nourishment. By August, she could claim her revenge.

As it turned out, it took less than one week.

On Friday, Porter ate the egg. He laced the pin with a wilted stem of cilantro and set the plate before himself on the card table. His eyes memorized each detail on the surface of the egg. Satisfied, he swallowed it.

His stomach pricked with accusation. The razor pain reminded him of heat cramps suffered in the jungle. He belched and thought his breath reeked of swamp rot. The egg was not agreeing with him. It went off in sweet celebration just as he clutched the antacid tablets in the pantry.

At dusk when Lena came home, she found her husband scattered like birthday party confetti all over her kitchen.

Bio: M.H. Joyce has written anthologized fiction and award-winning short films for the American Film Institute. She likes short stories by Bruce Holland Rogers, Captain Paul Watson's book Ocean Warrior, and driving through the Badlands of South Dakota. Currently, she is studying the work of contemporary shamans. Her latest forthcoming story is for Oyster Boy Review.