As the Young and the Beautiful Turn on the Light 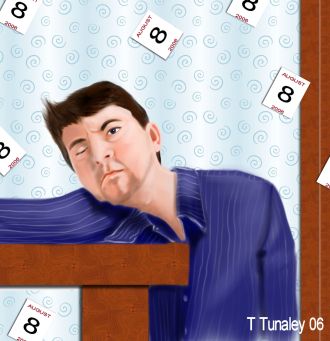 Blake Horace knew something was wrong as soon as he woke up. For starters, he didn't wake up in bed. Instead, he awoke fully dressed at the kitchen table. Felicia, his wife, was sitting across from him, buttering her toast, her eyes distant.

Felicia put down the butter knife slowly, deliberately, took a deep breath and said, "I guess you're wondering why I was so cold to you last night."

Blake did recall being in an amorous mood the previous evening and Felicia shooting down his advances, but that was the least of his worries at the moment.

"When I went to visit my mother at the asylum yesterday, she gave me some disturbing news," Felicia said, avoiding eye contact. "I've been trying to figure out how to tell you ever since."

Blake was only half-listening to his wife, his mind preoccupied with trying to fill in the missing hours. The last thing he remembered was Felicia telling him she had a headache last night then rolling over in bed, facing away from him, then suddenly it was morning and he was sitting here at the table, a plate of eggs and sausage laid out before him. The hours in between were lost, as if they hadn't happened at all.

"My mother said that Xavier Randolph is not my real father," Felicia blurted suddenly, tears coursing down her cheeks.

Blake's head snapped up. He was troubled by the fugue that had apparently come over him last night, but his wife -- who was more important to him than anything in the world -- was in obvious pain, and that took precedence over his own problems. Felicia's father, Xavier, was a notorious crime lord who had made life hell for Felicia and her mother, so much so that Felicia's mother was currently in a psychiatric institution. But now it was possible that Felicia wasn't Xavier's child at all?

"My mother had an affair when she was married to Xavier," Felicia said, dabbing at her leaking eyes with a napkin. "She became pregnant with me while Xavier was in prison for murdering Eugene Nesbit by sabotaging his plane. After Eugene was found alive on that deserted island and Xavier was released, my mother was petrified to let him know that she had cheated during his incarceration. She lied about her due date and convinced her doctor to back her up, saying that I was born two months premature though I was really right on schedule. It turns out that Xavier Randolph is not my father at all."

"No," she screeched, jerking her hand away. "That's not the worst part. My mother told me who she'd had the affair with, who my real father is."

Blake sat back, stunned, unable to comprehend the meaning of what Felicia had just told him. "What?" he said dumbly. "How -- what?"

"I'm your half-sister," Felicia said, bursting into tears again, burying her face in her hands and sobbing like a child.

Blake pushed up from the table, his legs wobbly as if he were drunk. "This is impossible," he said. "It just can't be."

"We've been committing incest since we were married three months ago," Felicia said through her tears.

"No, your mother is wrong, it's another one of her delusions," Blake said. "I'll go talk to my father. He'll set this straight."

Blake turned and hurried for the door.

Suddenly he was outside his father's office. He had no memory of leaving his house or of the drive across town. One second he was leaving the kitchen, the next he was walking up to the door of his father's office. What was happening to him? Why was he blacking out? Was it a recurrence of the brain tumor that had nearly killed him when he was sixteen?

Pushing all that aside for now, he knocked on the door. His father's gravelly voice called out, "Come in."

"Son, so good to see you," Irving said, standing and stepping around his desk. Irving was CEO of Horace Industries, a multimillion dollar corporation which did ... well, to be honest, Blake had never really understood what the company did, his father just always seemed to be sitting at a desk, yelling angrily into the phone.

"Dad, are you Felicia's father?" Blake blurted, having no time to beat around the bush. "Tell me it's not true."

Blake could tell by the way Irving's smile wilted and he sagged against the corner of the desk that it was in fact true.

"Because she's not," Irving said, his voice weary.

"So you mean it's not true, you're not Felicia's father?"

"What?" Blake exclaimed, a headache forming behind his eyes.

"I didn't want you find out this way, son, but you were adopted."

"Yes, I am not your biological father. And so you see, Felicia is not your sister."

Blake felt like he could collapse. On the one hand, he was devastated to learn that he was adopted, but on the other hand, he was relieved that his wife was not his sister.

"Mr. Horace, I am sorry to interrupt," said a woman Blake had never seen before, sticking her head into the office. "The shareholders are gathered in the conference room for the meeting."

"Thank you, Yvette. Tell them I'll be right there."

After the woman left, closing the door behind her, Blake turned to his father and said, "Who was that?"

"Yvette," Irving said, his brow furrowed with worry. "You know Yvette, she's been my secretary for ten years."

"Yes, I know Yvette, but that was not Yvette."

"Of course it was, she's just changed her hairstyle."

"I think I know what Yvette looks like. I dated her for a while after her marriage to you was annulled and before she married Uncle Ian. Yvette is shorter and not nearly so skinny as that woman."

"Son, are you feeling well?" Irving asked, walking to his adopted son and placing a hand on his shoulder. "You're acting strangely."

"No, no, I'm fine," Blake said, brushing Irving's hand away. "I need to get home, let Felicia know the good news."

Blake turned and found himself in his living room. He was starting to grow accustomed to these blackouts, the lost time. "Felicia," he called out. "Honey, are you home?"

Blake turned to find not Felicia but Veronica, his first wife. But that was impossible.

"Oh, Blake," Veronica said, rushing across the room and throwing her arms around him. "I've come home to you."

"Veronica, this can't be. You're dead. You were killed in that avalanche during our ski vacation last year."

"It's the most amazing story," Veronica said, holding onto Blake's hands as if she were afraid he'd fly away if she let go. "I was not killed in the avalanche, but I was injured and in a coma. I was found by a tribe of Eskimo, who nursed me back to health. I had amnesia and lived among the tribe. However, three months ago I regained my memory."

"Then where have you been for the past three months?" Blake asked.

Veronica's expression darkened. "I got back to town on the day you were set to marry Felicia. I came to the house but you were not here. Felicia was, however. Determined that nothing would ruin her wedding day, she locked me in the basement. She's kept me prisoner there ever since. I finally managed to escape."

Blake's mind was whirling, trying to make sense of all of this but overloading with too much information.

"Blake, honey, Irving called my cell and told me the good news," Felicia said, coming into the house. She froze when she saw Veronica.

"Don't let her near me," Veronica said, ducking behind Blake.

"Felicia, is it true?" Blake said through numb lips. "Have you kept Veronica locked up since our wedding day?"

"What?" Felicia said. "I would never do such a thing. I thought she was dead."

Blake, Veronica, and Felicia spun around to find Felicia standing in the doorway. At least, Felicia's mirror image, dressed in black with a nasty scar running down her right cheek. It was Delilah, Felicia's evil twin sister.

"Because of him," Delilah said, pointing at Blake. "I've hated you ever since we were teenagers. If you hadn't gotten drunk at that party and insisted on driving me home, we'd never have been in that crash and I'd never have gotten this scar. It put an end to what could have been a promising modeling career. I have since dedicated my life to causing you misery."

Blake stepped forward, shielding his two wives with his body. "Delilah, that is just ... well, it's just ... actually, it's just kind of silly."

"You think I'm silly, do you?" Delilah said, pulling out a gun.

Blake knew he should be scared, but this whole situation was just too absurd. Surely this much convoluted nonsense shouldn't happen to one person, not in a lifetime let alone a single day. It was as if God were drunk and just making stuff up as he went along.

"This is perfect," Delilah said with a wicked laugh. "You've got two wives and I've got one bullet. One will live, one will die, and you get to decide who gets the bullet. What'll it be, Blake?"

Blake looked from Felicia to Veronica, then back to Delilah and the gun she held in her hands. What could he do? He couldn't decide between these two women who both meant so much to him. Could he rush Delilah before she had time to pull the trigger?

As Blake tried to figure a way out of this mess, to formulate some type of plan, he noticed his vision going dark. The world around him was fading to black while a loud piano note rang in his ears. He surrendered to the fadeout, grateful for the reprieve, though somehow he knew that tomorrow he would be back in the same situation.