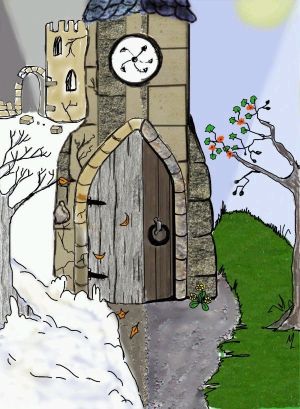 "I can outgrow you," said the Schemer. He shut his eyes and puffed out his cheeks and began to expand. Soon he occupied most of the courtyard.

"Oh stop it!" said the Rundle. He pulled a hatpin out of his wig and punctured the Schemer with a flourish of his hand. The Schemer deflated with a disappointed 'pop.'

Then the Rundle inflated. His body accelerated outward at the speed of light, so that the courtiers and the Schemer and Planet Z were squashed into his body.

As he sank into the vast body of the Rundle the Schemer saw the sun rushing towards him.

Huge hands covered him as the Rundle shrank back again.

"I can outlive you," said the Schemer. He shut his eyes and furrowed his brow, and the hands of the great clock on the castle wall accelerated, slowly at first, then faster and faster. The sun sped across the sky in a pencil of light. There was a pulsing of days and nights, season after season, year after year. The oak trees in the courtyard grew tall, and grew weary. The bulwarks of the castle crumbled away.

The Rundle laughed a great airy laugh and the Schemer felt its breath like Autumn.

Then the Rundle laughed backwards, and the oak trees became young again and the fallen masonry flew back into place. The oaks grew back into the ground and the castle vanished. Mountains rose and fell.

They were standing on a barren planet circling a bright star.

"You win," said the Schemer.

He threw back his head and pedalled his feet. He was stationary for a moment. Then he shot forward so fast that the air around him collapsed in astonishment. There was a BANG as he broke the sound barrier. He ran faster and faster until hills and mountains and oceans and continents fell away behind him. And the faster he ran the louder he heard it, the "Ha Ha Ha, Ho Ho Ho" of the Rundle's laughter. Now the Rundle was in front of him, smoking a cigar. Now he was behind him, tapping his shoulder. And now, the Schemer realised, he was getting out of breath. He dug his heels into the ground and created a place that people would later call the Grand Canyon.

Now it was the Rundle's turn.

Then the Schemer wept and his tears became an ocean that was drawn upwards towards the stars. But because he could not follow the Rundle (he could never follow the Rundle) they fell back to Earth in the morning.

They fall back to Earth every morning. But he never gives up.