The Third of Autumn

This issue fills out our third autumn and third solid year as a magazine. What's so significant about that, you may ask? Well, the end of the third year has a long mythic tradition:

Meeting New People: After three years of contemplation, Asanga the sage left his cave and met the future Buddha (The Tree of Enlightenment). After three years on the far side of the galaxy, Voyager encountered The Borg Collective (The Journey of the Voyager). Now if we could just get them all together...

Looking Forward to Change: At the end of three years of marriage, Rhiannon fell pregnant (The Mabinogion) and an Ensorcelled Prince was turned half to stone (The Arabian Nights). Change, like marriage, is always a mixed bag.

Getting Cool stuff: Harry Potter got his Firebolt at the end of his third year at Hogwarts (Prisoner of Azkaban) and, at the end of the third age of machines... On second thought, Marsha Morman will tell that story in the current issue. So join us for a fabulous end of a third lineup. -- Asher Black, Editor in Chief

One definition of a portal is "a grand and imposing entrance" but, as Lisa Agnew will show, not all portals are particularly extravagant to the eye. A web portal is a page that provides not so much a unique gateway to certain web sites (which one can visit directly), but rather unique connections between such pathways. The genius is in the arrangement. In other words, a portal may simply modify and mediate our perceptions of other places by suggesting certain relationships. That is what the present essay accomplishes; it presents us with a variety of portals and suggests certain relationships between them and ourselves. The essay is, then, a portal of portals, or metaportal, if you choose to enter in.

What is it like to be held in a dream -- not so much embraced as enveloped? In this retelling, Marr gives us a taut, sensual treatment of that experience from which we don't wish to wake.

Once in a while, an author gives us the opportunity to re-examine our myths, whether by retelling them or by filling in the details. Since the latter is exactly what occurs in this story, it falls to us to set the stage with a little background: According to Hebrew tradition, Abraham, breaker of idols, was born in Ur and was worshipper of the invisible God, while the Chaldeans, subjects of the Kings of Babylon, worshipped gods such as Marduk. Over the growing dispute, Abraham's father, Terah, took Abraham, Abraham's wife Sarah, and his nephew Lot (well-known for eventually fleeing another ancient city) and left Ur. The circumstances that led to Terach and Abraham's pilgrimage are fuzzy, and this is precisely what Marsha Morman explores in this short work of fiction.

The archetypal struggle between good and evil gnaws at the back of the mind. It is difficult, these days, to even identify one or the other with any particular person, people, or party. For that, we can only look to our myths. What will happen next? Will there be laughter or tears? The best of us is sometimes left in a position of nervous waiting. Again, sometimes the only resolution seems to be found in the stories we tell each other. These are the difficulties and the questions that Mark Gunnells examines in this work of short fiction. We think you'll like it as much as we do.

Much of the work in this issue delves into some of the images that people call God. Barrette's poem explores the idea of God as master builder or craftsman.

Many of us have been following with interest the Mosaic intrigue since MYTHOLOG began publishing the serial two years ago. The author offered these as stand-alone companion pieces to a (currently) unpublished manuscript entitled The Mosaic. The series finishes with The Ninth Soliloquy in which the assassination of the hero, The Lord Patrician Vardas, is being planned. Just as it began with Vardas' stratagem, the tale of ruin concludes with his short epitaph in the Mosaic Finale. The entire series can be found in the serials section of our archives. We've seen fit to supplement the publication with an historical background to give our readers a sense of the time, place, and players in this long-running tale.

One of the ways we explore myth is by retelling fairy tales. This practice is often criticized for tampering with the original corpus. Without knocking Disney or Grimm, we can easily forget that the originals don't matter. It's all the variations that do. The essence of a fairy tale is precisely in the modification and retelling. The story of Cinderella, for instance, is not one story; it's a tradition. In that sense, there is no original. Fairy tales are generally tribal stories, originally passed on in verbal form, with each culture or subculture finding their own significance, bending the meaning of archetypes and reinterpreting symbols, like patches sewn into a generational quilt. Only lately have we begun to argue over "the authorized version". All of the foregoing will be familiar to anyone who has been reading the genre. These will not be asking, "Is this closer to the original?" but rather, "Does it offer anything new?". That demand is deftly met in Wanak's piece. We'll only say that neither the prince, nor Cinderella, nor the ugly stepsisters are the protagonists of this story. You are liable to be surprised at the unlikely hero.

Time has a way of muting the moments. It's so fluid that, when we revisit it in our imagination, all of the meaningless seconds are taken out and, like a story without punctuation, we're left with the epic of our lives. That's the truth, you know; each of our lives, no matter how banal, is an epic. The mere fact of our continued existence, despite all, makes our memories chapters. What does this have to do with the author's story? The answer is this: as with memories, he's tapped sources of meaning that depend on our own stories, our own lives. Like a verse upon an epic, it is up to us to know where the pieces fit.

We'd like to thank Mary Pat Mann and Teresa Tunaley for their many diverse contributions this issue. Thanks to Anthony Miller for invaluable assistance on the new layout. Profound thanks to Craig Clarke and Tim Hoke, each of whom volunteered to carry on with his duties in the middle of special family obligations. Thanks, lastly, to Nick Laws, who ensured the smooth transition of our magazine's site to new servers, providing invaluable technical support.

The City of Ur: Chaldea, the Persian Gulf region of the Babylonian Empire, now Iraq, boasted a busy commercial center of Sumerian culture, called Ur, now Tell al-Muqayyar. Rediscovered in the 19th century and excavated in the 20th, Ur was once captured by Sargon the Great and likewise conquered by Nebuchadnezzar. It is home to the Ziggurat of Nanna, the Sumerian moon god, and of the code of Ur-Nammu, the oldest known code of law, predating the code of Hammurabi by three centuries.

You may wonder why we've gone from the 7th solioquy (last issue) to the 9th. The 8th is, regrettably, lost to history. There is no known copy, though we're hoping that one day it will be found within the archives of its reclusive author. We already have permission to publish it, so if any of our readers encounters this arcane document, do forward it to our editor.

Prince Lupin, after three years of visiting the palace of cats, cut one's head off, and she became a beautiful woman (The Stories of Prince Lupin).

Human children on Middle Earth start outgrowing elf children when they finish out their threes (The History of Middle Earth).

Associate Editor Wanted: Must have interest in editing the kinds of work we publish. Must be familiar with FTP and web page editing software or else HTML. Software can be provided. All applications require an interview and audition, which are conducted electronically. Other openings are available. 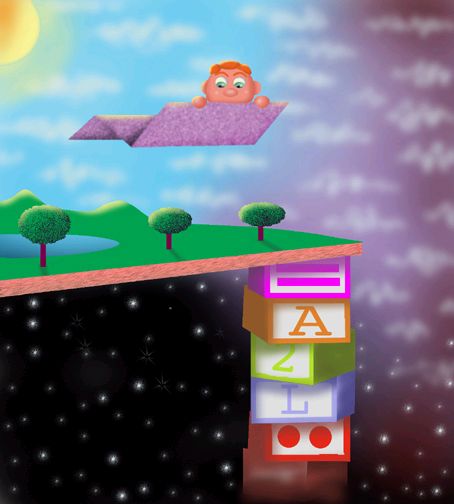 The Flying Boy cover by Steve Cartwright sums up MYTHOLOG -- playful, fanciful, and enamoured with magic.

The Garden
by Tala Bar

Dreaming in Thorns
by H.C. Marr

The StarKindler
by Elizabeth Barrette

Light as Gossamer
by LaShawn Wanak

"Would you like to dance?" A soft male voice said in her ear.

"Wet silk, yes; wet silk and wet skin and the slide of lovers

"Terach and his wife made something new one day. It was a son, and they named him Avram. He was the sort of son everyone wanted to have."

"Jehovah leaned his elbows on the table, fingers drumming on the shining surface. "I wanted to discuss events on earth," he said."

"Delicately, He tips the quickening coal into a ready-made nest of tinder."

"Basil picked up the dagger, and held it before him, its undulating blade reflecting the candles back and forth across his face."

"When midnight approached and she fled down the steps, we were the ones to cause her to stumble."

"I put the keys in the ignition. I had seen my father drive lots of times."