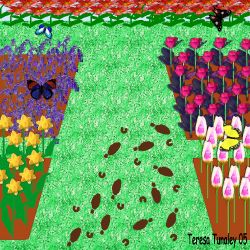 The garden was lovely, though a little too formal. Varities of geometrical shapes contained bunches of colorful flowers in bloom; trees and shrubs supplied different shapes in green; people roamed the paved or colored gravel paths, their eyes feasting on the sights. The garden spread on the mountainside, going from the top down to the lower city, six hundred steps and more, she was told. Tania shuddered when thinking about going all the way down those steps. For the moment, though, she stayed where she was, enjoying the sight and the lovely Spring day.

Having walked around for over an hour, and before she would start on her climb down the hundreds of steps, Tania reached a small place of refreshment. She sat down gratefully and ordered a small bottle of juice and a sandwich. She was now able to look with more leisure at the garden, and she discovered that the orderly flower and shrub beds were, so to speak, frayed at the edges. Their artificial lines disrupted and mingled with the natural wild growth on the hills. Pine trees were interspersed with thick bushes of mastic pistachio, loaded with little red berries. There were trees with white and pink blossoms, the name of which she did not know. Tania was impressed with the dark, slightly mysterious atmosphere, in complete contrast to the bright and open plants of the garden.

A slight breeze awakened, and Tania watched the branches of the pine and blossom trees swaying slightly; at the same time, the garden plants stood still, hardly affected by the wind. It added to the mystery, and made her feel a little uncomfortable.

"May I join you?" she heard a pleasant voice by her side. She turned her head and her eyes fell on the striking figure of a stranger... The phrase "tall, dark and handsome" hit her mind as she was gaping at him, and she blushed at its banality. Then, recovering, she made an inviting movement with her hand. She could see that most of the tables were occupied, and had no proper excuse for refusal.

"All by yourself here? Not waiting for someone else? A boyfriend, perhaps?" Smiling, he asked questions she found herself quite reluctant to answer. A waiter came and the man ordered a cup of coffee, relaxing in his chair.

While sipping her drink, having swallowed the last bite of her sandwich, she stared at him under lowered lashes. His eyes were shiny brown, the sunlight reflecting in them like curious golden spots; the lines of his face were regular to a fault, making her again feel uncomfortable. She was beginning to feel it was a mistake to come to the garden on this day.

As if sensing her discomfort, the man continued talking. "What do you like best," he asked, "the formal garden or the natural forest?"

There was no expression on his face, and Tania was not sure whether to take his question seriously or as a jest. Then the words burst out of her mouth, as if against her will, "I wish the beautiful flowers were arranged in a less formal order, closer to the wild forest but not completely wild. I feel some framework is necessary, but not so stiff as that."

He nodded, as if the answer satisfied him, and she could not tell what he was driving at. He then said softly, "But you would not like it if the garden had gone completely wild, would you? It would frighten you, wouldn't it?"

She closed her eyes, remembering. Herrik had been too wild, and perhaps that's why she kept rejecting him until, finally, he left. He did not fit into her regular way of thinking and behaving. She was going to justify her behavior then, as she opened her eyes....

But the man had gone, leaving no one to talk to again. All around her it was very quiet, as if Nature were holding its breath. Then, into that silence came a soft, high-pitched music, the like of which she had never heard before. It was like thin pipes playing sweet tunes. There was seeming order to the arrangement, but the music also sounded wild with disorder.

Looking at the garden, Tania noticed that the variegated flowers arranged in regimental lines, which had not moved before with the breeze, had started waving their blossoms to the music, dancing in a soft, colorful way. Then, all of a sudden they uprooted themselves and took off, moving in meandering lines around the shrubs, breaking the order in which they had been planted. At the same time the trees and bushes were moving in the wild forest, getting into the garden, intermingling with the flowers -- bright and dark green, yellow and red and violet, all mixing together into one vibrant kaleidoscope.

"Would you like to dance?" a soft male voice said in her ear. For one moment she expected to see the strange man before her. Instead, in the confused world of sounds and movement, an even stranger form appeared. From the waist upward it looked like a man, though unusually covered with hair -- on his body, on his face. Even the hair on his head grew long and tangled. From the waist down, he was like nothing she had ever seen before. He -- it was covered with fur -- she was These were no sort of pants; and its feet! There were no shoes on them, and Tania knew no shoes would ever fit such hooves.

The creature was making little skipping jumps, as if impatient for her answer. But he did not give her a chance to reply, because the next minute he grasped her hands, pulling her into his skipping and leaping around!

Tania, a dance-loving girl who had enjoyed a waltz or a twist or even any kind of disco dancing, tried to resist but to no avail. Soon, she was breathless and found it easier to submit to the creature's wild movements than to resist them. Giving in to the strange dance, her blood started to flow more easily, her body grew warm, and her heart melted. The world had become a swirl of colorful spirals, swaying around her, wrapping her, stirring her blood and releasing her movements, until at last she was overcome. With her head in a haze, she lost all sense of the world.

Tania came to. She was sitting at the little table at the garden's refreshment establishment. She could hear no music, but the breeze was blowing softly, cooling her burning cheeks. Staring at the garden, she noticed again the regular lines and regimental arrangement of flowers and shrubs. But the natural forest beyond looked closer, encroaching on the planted garden. Something had occured, which drew the cultivated garden and the wilderness beside it into almost one entity.

For a moment Tania sat still, quietly thinking and trying to explain to herself rationally what had actually happened. Then, as if driven by some hidden force, she rose and walked to the edge of the garden. Passing the flowerbeds, she thought she heard a murmur rising from the beautiful blossoms, saying, "Look, Tania, at our lovely straight lines, our even squares and perfect circles that you have always loved so much."

But she shook her head. Not any more, she answered in her mind. I think I'll just go and take a stroll in that wild wood over there, beyond your border. I have a feeling there's something there I have missed for a long time....