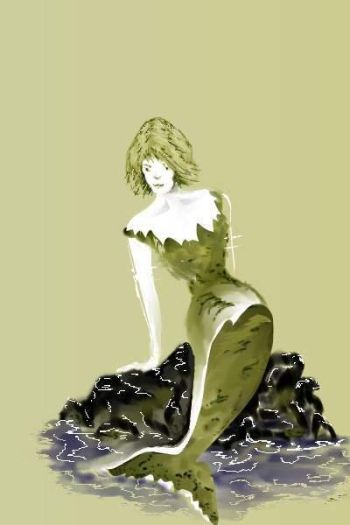 Seductively female upper body, scaly fish tail… we'd know her if we saw her. But what are mermaids? Why do they swim through stories today as irresistibly as they have for thousands of years?

Maybe it's the rich metaphoric domain:

Choose any mix of those qualities and you can find a mermaid tale to fit. Of course, it's the mixing that makes an absorbing tale. Edges are the most productive environments in nature. Boundaries are where the magic is, and no boundary is more important than the seashore. Perhaps that liminal space where mermaids dwell reminds us of our own beginnings in water, those earliest days when we floated in a personal, private water world.

Water is crucial to everything mermaids are, and the element traditionally opposed to water is not land, but air. What separates us from the lovely sirens of the deep is not what we stand on (merfolk, after all, build castles on the ocean floor), but what we breathe and what touches our skin. Elementally, air is intellect, analysis, categorization, setting limits. The magical tool of air is the sword. Water is emotion, relationship, negotiation, synthesis; its magical tool is the cup.

Legends tell of the fatal attraction mermaids have for sailors and fishermen of all lands. Once he catches sight of her long hair and voluptuous form, nothing can keep him from following her under the waves. Many traditions also give mermaids beautiful singing voices, enchanting enough to seduce, even when the creatures themselves are hidden in mists or seaspray.

A Cornish legend tells of a young man whose beautiful tenor led the church choir in song. A mermaid heard his voice one night, carried on the wind as she rested on the rocks. Determined to see who sang so sweetly, she found a dress to cover her fishy tail and managed to reach the church door. She sighed softly to see the young man, as comely as his voice. He, hearing that sigh, looked to the back of the church and lost his heart. He followed her under the waves and was never seen again on land, although the people of the town claimed to hear, rising over the waves, his voice singing together with that of his love. 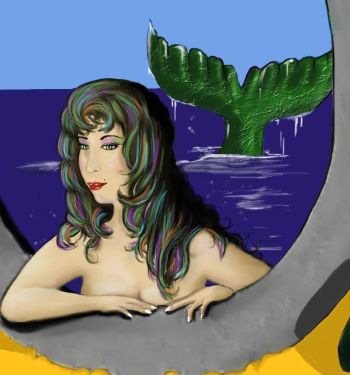 Following the ancient tradition of the Christian West linking women, sex and death, folklorists see in the theme of the fatally attractive mermaid a reflection of the dangers of Nature herself. When sailors and fishermen went out in small wooden boats, the livelihood of a community depending on the size of the catch and the safe return of the men, the sea was indeed a powerful, dangerous and capricious force.

After the Industrial Revolution, when we conquered nature with machines (or thought we had), mermaids took on a more wistful, nostalgic air. The Disney machine is popularly criticized for turning the ancient and powerful mermaid into a girl who wants only the love of a prince, but Victorian writer Hans Christian Andersen deserves credit for that. Compared with his Little Mermaid, Ariel is a feminist to be reckoned with.

In the original story, mermaids lack souls as well as legs. The Little Mermaid gives up all she is to pin her hopes of eternal salvation on gaining the love of the prince. Once on land, constant pain is another price she pays, as every step hurts her delicate feet. The prince dresses her in boy's clothing, never seeing her as a woman, and we know he will not love her. She has no weapons and no guile, and throws herself into the sea to die. As a role model, I much prefer Disney's Ariel, who sees her time on land as a glorious adventure, fights against the forces arrayed against her with everything she has, and wins back not only her own freedom, but her father's as well.

Today, we poison the oceans and mindlessly kill its creatures. For us, mermaids represent a mysterious but unsullied nature, something (or someone) that cannot be tamed. Daryl Hannah's mermaid (Splash) has more in common with E.T. than with cold-hearted seductresses singing warm-blooded men under the waves or timid girls seeking redemption: Drawn into a new world, she and E.T. are captured by scientists with hearts as cold as ocean depths or the farthest reaches of space. We recognize the emptiness of scientific technologies, but see mermaids and friendly aliens as exceptional gifts given only to the pure of heart. Our everyday sirens are torch singers in shadowy nightclubs who sing of heartache and loss.

Goddess spirituality links this sense of loss to a long-submerged awareness of feminine sacredness. The ancient forms of the Great Mother include goddesses who appear sometimes as fish, like Atargatis, or were born of the sea, like Aphrodite. In some legends, the fish tail is acquired when the goddess throws herself into the sea in remorse for killing a man. But Robert Graves associates fish goddesses with tales of successfully eluding pursuing ravishers: As fish often escape the nets of men, so goddesses leap into the sea for the same reason.

The association of goddesses and water carries through the Celtic traditions, in innumerable instances of sacred wells, pools or rivers dedicated to goddesses. A medieval legend that appears in multiple versions tells of mysterious women who guard a magic well or fountain. Approached by invading soldiers who ask for water, the women gladly provide it. But then the soldiers decide they want not just a drink but the well itself. The women are raped and slain, the well taken over. But without its feminine guardian, the well runs dry, a potent symbol of what happens when the sacred feminine is ignored or despoiled.

For those times when consorting with goddesses feels a little too high-minded, there are the ribald and grotesque sides of mermaid lore.

The ribald is neatly represented in what is known as the mermaid problem: A fisherman unexpectedly catches a mermaid in his net and promptly lets her go. His incredulous companion asks, "Why?" to which the fisherman responds, "How?" Mermaids are irresistibly seductive, but how is the seduction to be consummated? Fish guys fertilize thousands of eggs only after they emerge from the female's body. From the perspective of the human male, where's the fun in that?

Some writers use dolphins as a model. As aquatic mammals, they have the normal mammalian equipment tucked neatly away in pouches. But mermaids are clearly fish, scales and all. And yet there might be a solution: Ancient images of mermaids include some with split or double tails. None of these drawings or carvings show anatomical details, but the implication is clear. Oddly enough, the original Starbucks logo included just such a split-tailed mermaid. She's still there, but over time, the suggestiveness of her image diminished as the logo was redrawn more simply and in close-up. Today, only the mermaid's smiling face framed by the ends of two tails remain.

The grotesque is as close as Snopes.com, popular repository of 'net hoaxes and legends, by way of P.T. Barnum. After the 2004 tsunami, photos began circulating of small "mermaids" with clawed fingers and sharp teeth said to have been found washed up on Indonesian beaches. The photos were remarkably similar to the "Feejee Mermaid" exhibited by P.T. Barnum and associates in the U.S. and England during the mid 1800's. These manufactured little monsters generally turn out to be sewn-together parts of monkeys and fish, but this is hardly a new hoax: One mummified specimen found in a Japanese temple is thought to be 1400 years old.

Does this descent into cheap tricks mean that mermaids are finally washed up? Is our attraction to fish-tailed beauties with flowing hair and irresistible voices coming to and end? I don't think so. Google "mermaid" and you'll find an unending supply.

In fact, I predict an emerging renaissance. Global warming is bringing us violent storms and rising water levels. Science is only scratching the surface of genetic manipulation. Toss those trends into the mix with the ancient legends, and you have the ingredients for some powerful storytelling. I hope to catch sight of a few mermaids swimming through those stories-to-come in all their beautifully complex and sensuous mystery.